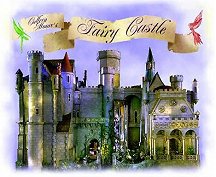 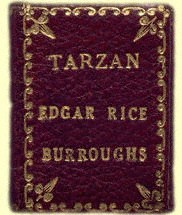 Colleen Moore's position as one of the most popular actresses in Hollywood gave her the resources to produce a "Fairy Castle" of fantastic proportions. Beginning in 1926, Moore enlisted the help of many talented professionals to help her realize her vision. In 1937 she asked ERB for a few words from a Tarzan book and an autograph to add to her miniature Fairy Castle Collection at The Museum of Science and Industry in Chicago. What was returned to her was an original fable featuring a princess and Tarzan, Jr. written by ERB and illustrated by ERB and John Coleman Burroughs. The unusual thing about this story is that it was printed, by hand, in a one-of-a-kind, one inch by one inch, miniature book. 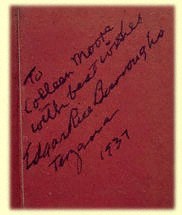 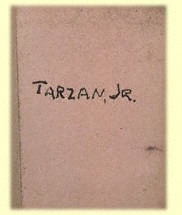 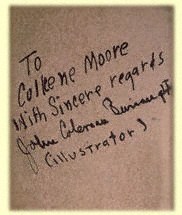 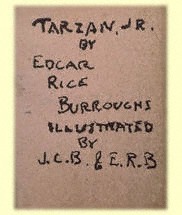 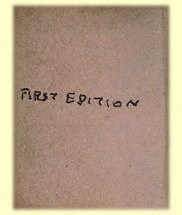 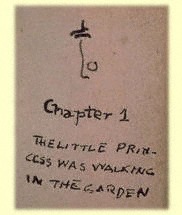 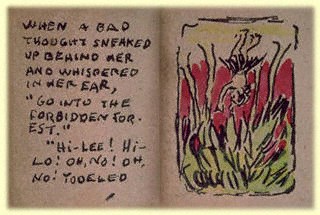 The little princess was walking in the garden when a bad thought sneaked up behind her and whispered in her ear, "Go into the forbidden forest." "Hi - Lee! Hi - Lo! Oh, No! Oh, No!" yodeled 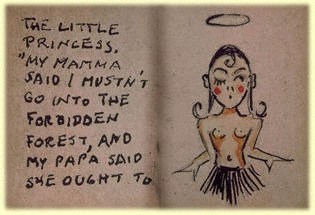 the little princess, "My Mama said I mustn't go into the forbidden forest, and my papa said she ought to 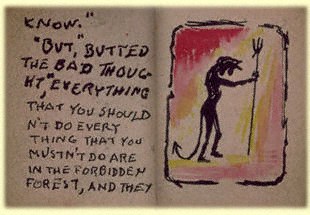 know." "But, but" butted the bad thought, "Everything that you  shouldn't do, every thing that you mustn't do, are in the forbidden forest, and they 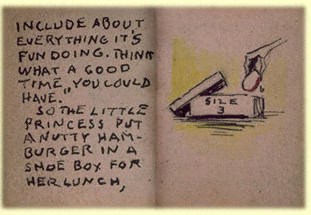 include about everything it's fun doing. Think what a good time you could have."

So the little princess put a nutty hamburger in a shoe box for her lunch, 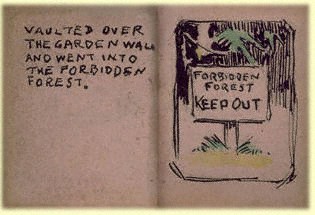 vaulted over the garden wall and went into the forbidden forest. 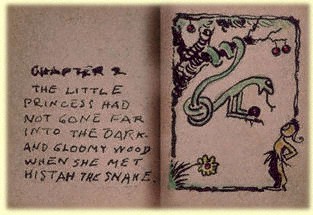 The little princess had not gone far into the dark and gloomy wood when she met Histah the snake.

ILLUSTRATION: SNAKE HANGING FROM A TREE WITH A LITTLE GIRL LOOKING UP 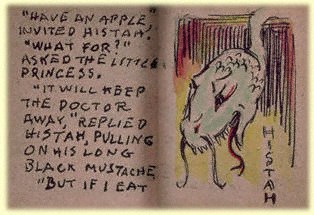 "Have an apple," invited Histah. "What for?" asked the little princess. "It will keep the doctor away," replied Histah, pulling on his long black mustache. "But if I eat

ILLUSTRATION: FACE OF A SNAKE WITH WORD "HISTAH" 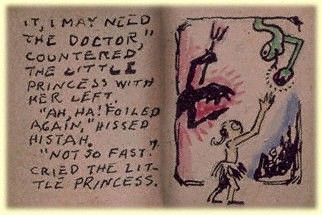 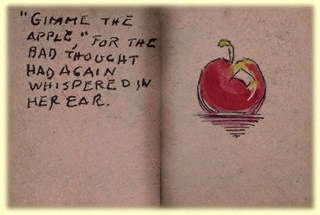 "Gimme the apple," for the bad thought had again whispered in her ear.

ILLUSTRATION: ELEPHANT WITH THE GIRL

barged up and took it away from her, "Beat it!" he trumpeted at Histah. Then he ate the apple himself. "What have you in that shoe box?" he asked.

ILLUSTRATION: ELEPHANT IN THE FOREST

"A nutty hamburger," replied the little princess. "Mercy me!" swore Tantor. "What's the matter with it? -- Dementia praecox?" "No, just plain

"Well, you never can tell when it might develop a homicidal mania," said Tantor. "Give it to me." So he took the nutty hamburger

and ate that too. Then he went away from there into the land of ptomaine.

The little princess was very hungry; so she went deeper into the dark, damp wood looking

for another snake with an apple. But she didn't see Numa the lion stalking her. Numa, too, was very hungry; and as there are not many callories (sic) in stalks, he planned on

bronzed giant, naked but for a G string, drop from an overhanging branch full upon the tawny back of the carnivore. It was Tarzan Jr.!

Once, twice, thrice his gleaming blade sank deep into the side of the great cat; and as Numa sank lifeless to the mottled sward, the Lord of the

Jungle placed a foot upon the carcass of his kill, raised his face to the heavens, and voiced the victory cry of the bull ape.

ILLUSTRATION: TARZAN, JR. STANDING ON A BLEEDING LION WITH THE PRINCESS IN THE BACKGROUND

The little princess was still hungry. "Let's eat the lion," she said, "unless you happen to

ILLUSTRATION: PRINCESS AND TARZAN JR. STANDING BACK-TO-BACK WITH BLOOD DRIPPING FROM HIS KNIFE

have an apple in your pocket."
"I haven't any pocket," admitted Tarzan Jr.
"All right then," said the little princess. "Let's skip it."

ever after - and that is what the little princess got for disobeying her mama and going into the Forbidden Forest.

ILLUSTRATION: "KEEP OUT" WITH A RED X OVER THE SIGN.