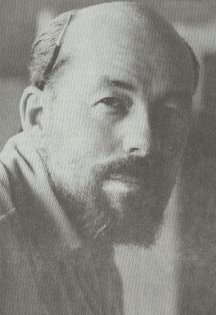 This was the first time JCB illustrated an entire Tarzan novel.  He did the art work for the dust jacket, a frontispiece, and four interiors plates.  It was published in 1938.

John (Jack) Burroughs was the third and final child of Edgar and Emma Burroughs.  He was the father of John Ralston and Danton Burroughs.  He was born in Chicago on February 28, 1913 just 13 days after Eds father died.  He came with his parents to California when he was six months old with his sister, Joan, age five, and Hulbert, age four.  Eds sole income was from the sale of magazine stories.  Not a single book had been published at the time.

Jack took over the unenviable job of illustrating ERBs novels after the great J. Allen St. John.  Ed understandably wanted to see his sons work connected with his own, and his first effort was with The Oakdale Affair and The Rider combination of 1936.  He matured rapidly as an artist, and the illustrations he did for ERBs 1948 Martian novel, Llana of Gathol, were superb.  He illustrated a total of 13 Burroughs books.

Even though Tarzan does not appear on the dust jacket of this novel, it is a striking one.  Tarzan is the only word of the title in red, which contrasts in a startling way with the unusual black and white  format. Actually the dust jacket is in subtle shades of grey, brown, and white.

A swarthy, bearded, turbaned man has his right arm around the upper body of a young girl who is struggling away, actually tearing his shirt in her efforts.  The man restrains her with his left hand around her left wrist and forearm.  The scene is strangely calm for the apparent violence being enacted.  The mans eyes are closed, and he seems to be holding her gently in an embrace rather than in a desperate situation. The two figures are outlined in sweeping brush strokes of the darkest black that fade into lighter grays. In the right background a man wearing an triangular Chinese hat carrying two baskets on either end of a pole held across his shoulder walks away not seeming to notice the struggle.  Banners with Chinese lettering hang over the street he is entering, which also form a border around the entire picture.  It suggests that the Forbidden City of ERB has something to do with the famous Peking. 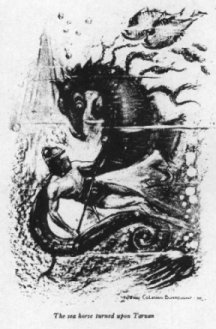 This is the only ERB book which has a color frontispiece.  It is a picture of the battle with the sea horses that takes place in chapter 31.  Tarzan wearing a diving helmet and a pair of red, belted swimming trunks is portrayed plunging his trident into the heart of a sea monster that appears to be an gigantic sea horse.  A tower of the underwater city rises to the upper left.  The upper right contains two fat fish that look as though they had just come from Walt Disneys version of The Little Mermaid.  The structure of the illustration is dominated by the S-curve of the sea monster.  A thin, web-footed Tarzan is seen from the front, just rolling over from the force of his blow.

A viewer used to the more ferocious monsters of Frazetta may be put-off by this mildly pleasing illustration; yet it is a well-conceived effort, even though it may be  more suited to a childrens book rather than a fierce Tarzan story.  In some ways, JCBs illustration is a book-plate design rather than a depiction of a desperate struggle. Tarzan is really no more than a floating water flower beneath a
friendly-looking sea horse in an aquarium. 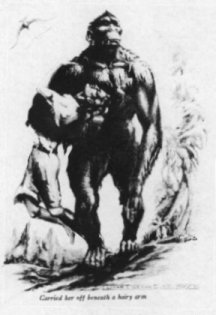 A huge, gorilla-like figure holds a dark-haired woman in his right arm.  Her left arm in turn rests across his own, her hand relaxed against his shoulder.  The beast is portrayed as a man-ape (Ungo, the King Ape) who stands as posed as an illustration from an encyclopedia or a scientific text attempting a rendition of one of the relatives of early man.  As in the other JCB works, design dominates drama.  There is a lovely curve of jungle growth that frames the work on the right, while the body of the relaxed girl curves on the left forming a perfect circle.  There is an impassive calm that hovers over the savage scene. Craft and classic repose is JCBs hallmark. 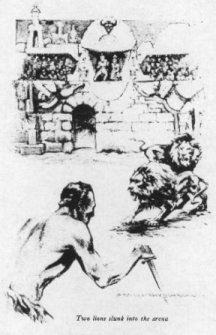 Two sculpted lions stand in the middle of an arena.  A curved stone wall, with tiers above filled with the audience, and a fanciful design above all that forms a static background and nearly half the plate.  The Tarzan figure is seen from waist up in the immediate foreground.  He is presented in a nearly back view with his right arm presenting a dagger at a rather odd downward angle.  Despite the mans great  physical development, he looks as though he could be devoured by the beasts, perhaps because of the weakly hunched shoulder and back.  The whole picture looks like a diorama made from clay.  Tarzans hair is short and appears to have been recently curled by a hairdresser.  The foremost lion is the prize of the picture, even though he appears to be made of bronze.  I suspect that JCB was a better sculptor than a book illustrator. 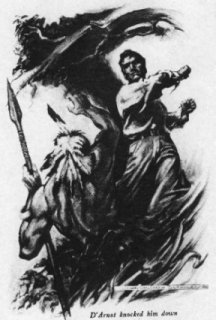 This is the best plate in the series.  A very handsome white man in a flowing white silk shirt and flowing trousers is facing the viewer. He has just struck a much larger man, who appears to be wearing the feathered headpiece of an American Indian which covers his entire skull.  The Indian figure (seen from the back) has a tremendously well-developed, muscular back.  His right arm is raised as he is falling backwards into the thick jungle.  His left arm supports his body momentarily with the aid of a thick spear.  The picture swirls in a circle of motion from the waving plants below to the tree branch that curves over the entire picture above.  The design is impeccable.  The action is presented with drama and force, but the prize again goes to the sculpted back of the Indian figure. 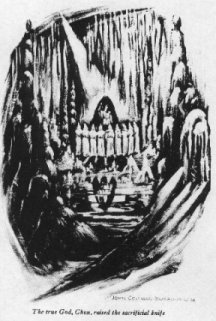 Without knowing the other plates in this series, one might conclude that this is a very odd illustration.  However, it fits into the sculpted, circular designs in JCBs plan quite well.  Here we see another well-executed design.  This time an ice cave curves upward from each side of the picture with stalactites hanging down at the top.  The center of the design is an altar surrounded by white robbed priests with the central figure standing with an upraised knife.  The entire scene is reflected in the water below.  The large black, jagged rock at the bottom of the picture is echoed by the white beam of light that pours in from above.  The pointedness of the rocks and ice gives the scene a harsh, jagged feeling.  Everything is distant and cold, but the black and white shapes are carved with an eye to balance and proportion.

JCBs strengths in this series are in design and sculpture.  (I am looking forward to looking at more of his work, especially the Llana series, which I have not seen.)