"JUST MADE A LIVING" IN BUSINESS; NOW HE'S RICH
Creator of Tarzan Describes His Amazing Rise to Fame and Fortunes as Author
By Roselle Dean ~ Los Angeles Times ~ June 25, 1922

Back of a prosaic roll-top desk in Chicago eight years ago, Edgar Rice Burroughs was directing business and never giving his friends an inkling of his literary aspirations.

Today he is rich and famous -- the master of Tarzana, magnificent ranch home in the San Fernando Valley.

The author says he never liked business and admits that for years he had been garnering "plots" for future development. With a living to make and a growing family to raise, these plots had of necessity to remain leashed in Mr. Burroughs's "brainery," only coming to light eight years ago when changes in the commercial career of the writer gave him more leisure to dip his pen into literary ink.

The submission by Mr. Burroughs of his first story was in a unique way, for the author, doubtful of his talent and half ashamed of his efforts, sent the story to a publisher when it was only half completed.

No one was more surprised than Mr. Burroughs when a letter came from the publisher to the effect that he liked the first half of the narrative and if the remaining pages were as interesting he would be glad to accept the story. The remainder was submitted and the story was accepted, published and was highly successful.

Mr. Burroughs soon after became famous as the author of "Tarzan of the Apes."

Later, with royalties rolling in from his books, and their screen versions, Mr. Burroughs made a visit with his family to Southern California and then returned to his home at Oak Park, a suburb of Chicago -- but the call of the mountains and the sea became more and more insistent. He bought and christened Tarzana Ranch, one of the show places of California.

Tarzana is reached through a red, ragged-robin rose hedge, and riding through this floral bower, hovered over by humming birds and butterflies is an experience at once and forever engraved upon the memory. 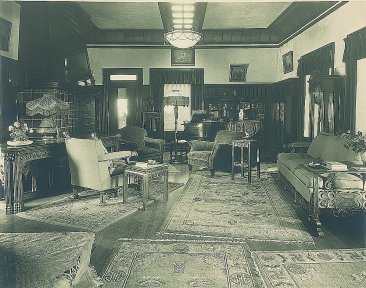 The interior of the interesting castle is both homelike and artistic, huge fireplaces suggesting the delightful evenings of the Burroughs family and their friends; inglenooks, the joy of kiddies in the picture book stage; a well-stocked library; spacious ballroom; stately dining hall, and the breakfast corner with its gorgeous view of the mountains.

ERB and Family at the Tarzana Pool

The swimming pool and the gym attest the athletic proclivities of the author and  his family, which includes three splendid specimens of young America, one daughter, Joan, and two small sons.

With orioles and morning doves fluttering in the sycamores, it was difficult to record anything about Tarzana other than the glories of nature, but as pure-bred Hampshire swine were much in evidence in another part of the ranch, they must, as rare animals, come in for their honorable mention.

Pedigreed, vicious-eyed bulls, sufficiently 100 per cent to win the commendation of a learned professor of husbandry, munched mildly back of an inclosure which we all noted with much satisfaction was of substantial quality, while less dangerous smooth, brown cows, tagged by their wobbly calves, grazed contentedly near by. 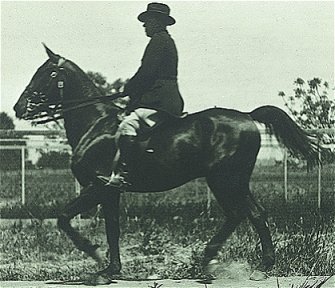 Even the high-headed steed that cantered and whinnied to the master of Tarzana, failed to bring one completely out of the enthralling grip of the first glimpses of Tarzana Fairyland -- its hush and restful appeal.

Coon Skin Cabin, a half-mile from the ranch house, a rustic structure of logs, utilized as a mess house and sleeping quarters for the employees of the ranch, is another interesting feature of this fine estate, and is a spot one would consider ideal for the author to obtain his inspirations -- until he tells you that he writes "up over the garage" and refuses to have his den "fixed up" according to his wife and daughter's ideas. 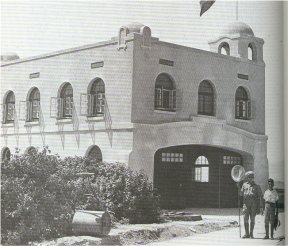 Edgar Rice Burroughs, whom the writer knew "way back when," is a picturesque fellow, big frank and unassuming. Despite his successes he never is sure that a new story will "go."  His fortunes have in no way affected him, his ambition is to write "better and bigger stuff," and as he looks about his beloved Tarzana, one can easily realize just how contented and happy is his existence in the beautiful hills that almost conceal his home.

Mr. Burroughs is now busy on another Tarzan story, which will be his forty-second book. 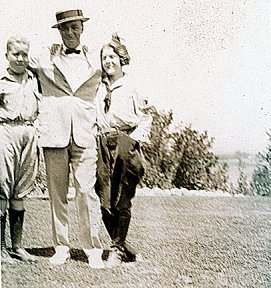 Ed and Kids at Tarzana